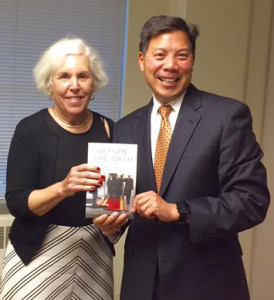 September 30, The National Academy of Public Administration hosted a discussion on presidential transitions focusing on Martha Kumar’s new account of the Bush to Obama transition, Before the Oath. Current Deputy Secretary of Labor Chris Lu (former executive director of the Obama transition) led the discussion and keynoted the event.

Later Martha, WHTP’s Director, posed for pictures with Secretary Lu and when he had the chance, Secretary Lu tweeted out:
“Enjoyed discussing Presidential transition plannning with @mkumar38 at NAPA in Washington. Highly recommend her new book.”

Secretary Lu underscored a couple of key lessons from the 2008-09 transition experience. These included that the President’s first major policy recommendation — the 2009 Recovery Act — relied on heavily on Executive Branch expertise and the “work of career employees.” One regret they had afterwards was that they had not started talking much earlier with these career specialists.

Second, future transitions should make management a higher priority. he suggested. “We were not considering management [issues], such as procurement reform, which are not sexy or talked about on the campaign trail, just policy and politics,” Lu said.