This page provides documents the pace of appointments in the current presidential transition and by comparison with predecessors in the modern appointments era (beginning with the Reagan presidency). See basic descriptions here.

Pace of Nominations – rebounding to its earlier pace but still below the leaders. 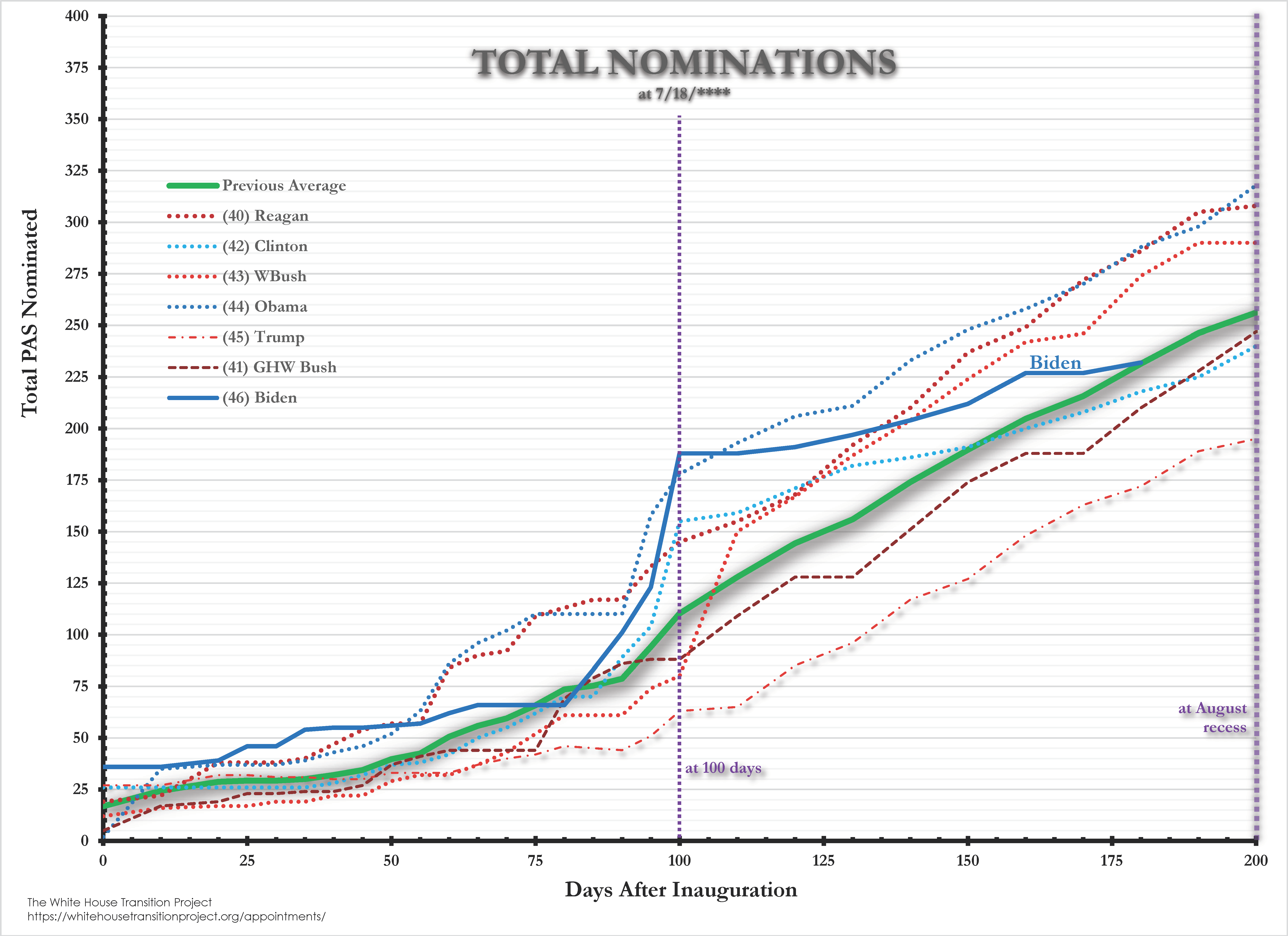 Poor and stalled out. The situation on confirmations remains well below average and leveling off when the average Senate has begun to take off confirming nominees. The earliest pace on confirmations set records but not in a good way. The average administration has filled about 60% more government positions as the Biden team. “The lack of Senate confirmed presidential appointees undermines changing policy and answering critical questions about the direction of government,” notes Heather Ba, an academic expert on appointments at the University of Missouri at Columbia and a WHTP expert. “It can leave an administration in a state of ‘policy drift’.”

Pace on the “Stand-Up Critical” Positions

From 2010 to 2012, the WHTP partnered with the National Commission on Reform of the Federal Appointments Process to inventory the entire Executive function and within it identify positions critical to carrying out the duties of the national executive. In 2020, WHTP re-inventoried the executive to update our assessments. In particular, that new inventory identified a number of inspectors general, adding them to the list, growing the inventory to 274 positions critical to fulfilling government responsibilities and hence critical to standing up the American executive function. In some cases, positions have fixed-terms and have occupants holding those terms so each administration’s stand up starts in a different place. For example, the 2017 Trump stand up started with 51 of the 274 positions already filled by the Obama administration with fixed termed appointments, while the Biden team came to office with only 38 such positions filled by the Trump administration. With confirmations, the Biden team now has stood up 36% of these critical jobs, whereas with those in place the Trump team had stood up 32%. These are record setting, bad performances.

While the Biden performance on these positions mirrors closely the Trump record-setting slow start, Biden has gotten 59 critical nominees confirmed (to Trump’s 37), and Biden has a slightly larger backlog waiting on the Senate, (61 vs 59) so as the Senate begins to work, the Biden stand up should begin to spin up but this pattern in the Senate continues to seem troubling. Watch this space. 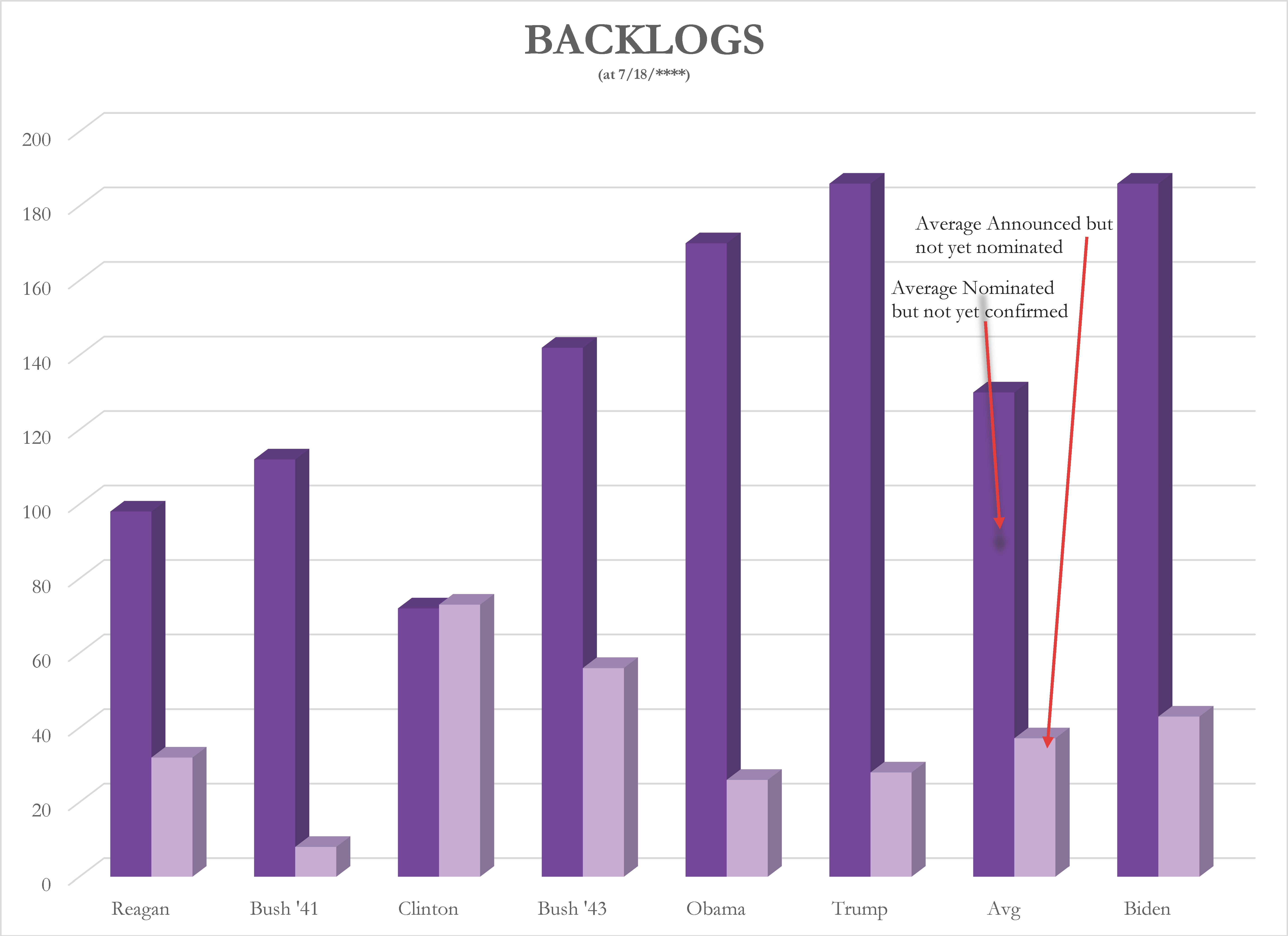 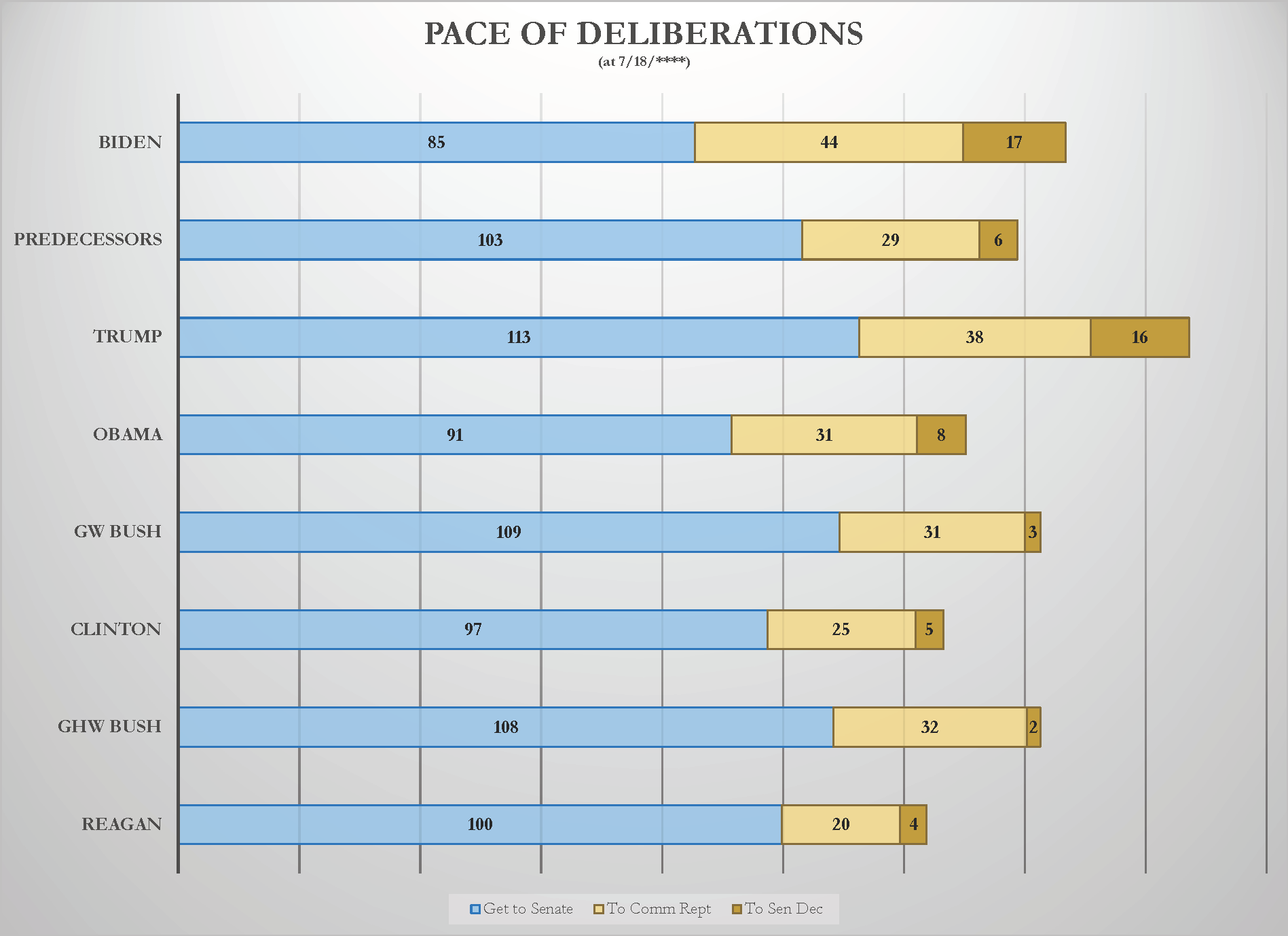 The White House’s Turn: The Biden White House has been on track (compared to its predecessors) to identify and forward nominees to the Senate. The average administration takes about 103 days while the Biden team has taken 85, a statistically discernible difference.

In the Senate, receiving a nominee results in a referral to a committee of jurisdiction which starts the Senate’s vetting. And here things start to go off the rails. This first Senate stage (indicated with light tan on the graph) ends with a committee report to the full Senate or when the full Senate “discharges” its committee of further deliberations, which then starts a clock on how long the Senate goes before it makes a final and official decision (the dark tan bar).

The Senate’s Turn: The typical Senate has taken around 35 days to reach a decision on a nominee. The current Senate committees alone are taking 61 days! By comparison, the last time the Senate was evenly split and managed by the President’s party, the Senate took 51 days to complete vetting and confirmation. On top of that pattern, the numbers are bad when it comes to full Senate decisions. The current Senate is taking almost three times as long as the average to decide to confirm Biden’s nominees (17 days against an average of 6 days).

What’s This Delay About? The typical wisdom on Senate delay highlights partisanship and the Senate’s myriad mechanisms for following “courtesy,” which infuses a trickle of partisan delay into the system. Recent scholarship on appointments by the White House Transition Project, however, has highlighted the importance of the policy agenda in affecting both the pace of White House and Senate business in determining its deliberations on appointments. “We tend to consider appointments as a separate thing, set apart from the rest of Senate business,” notes Terry Sullivan, WHTP’s executive director and an expert on appointments, “but appointments are just part of the larger policy making process, so the pace of appointments significantly reflects what else is before the government.” That research concludes that the greater the demands on the Senate for policy making the less the time to spend on appointments. “In effect, the Senate can’t walk and chew gum at the same time.”

So the Senate workload has two kinds of consequences for appointments. First, more workload detracts from the time Senators have to concentrate on vetting and considering appointments.  Ninety days into a typical administration and the Senate would have just begun considering the president’s and the typical policy agenda. But for President Biden, the Senate has already wrestled with a presidential impeachment trial, an attempted coup, an ongoing public health disaster, an economic collapse mirroring the Great Depression, and passage of two historically massive spending programs. Delay on those grounds alone would be inevitable says the research.

Second, policy making increases the likelihood that Senators will use nominees as pawns in a completely unrelated game. For example, Texas Senator Ted Cruz (R) has already threatened to slowdown two Biden nominees for the State Department to highlight his own opposition to a gas pipeline deal between Russia and Germany, even though the Biden administration has already announced it opposed the same pipeline and had already placed sanctions on the Russian actors involved. The threat of delay on these nominations clearly has little to do with the two nominees by comparison with whatever it is Senator Cruz wants to promote.

In addition, the agenda can affect the decision process in the White House as well, delaying nominations to concentrate on policy making and a growing agenda along with essentially crisis management carrying out new initiatives. Since the inauguration, for example, the Biden White House has produced fewer new nominations as the average of his six predecessors: 32 to 35 respectively. 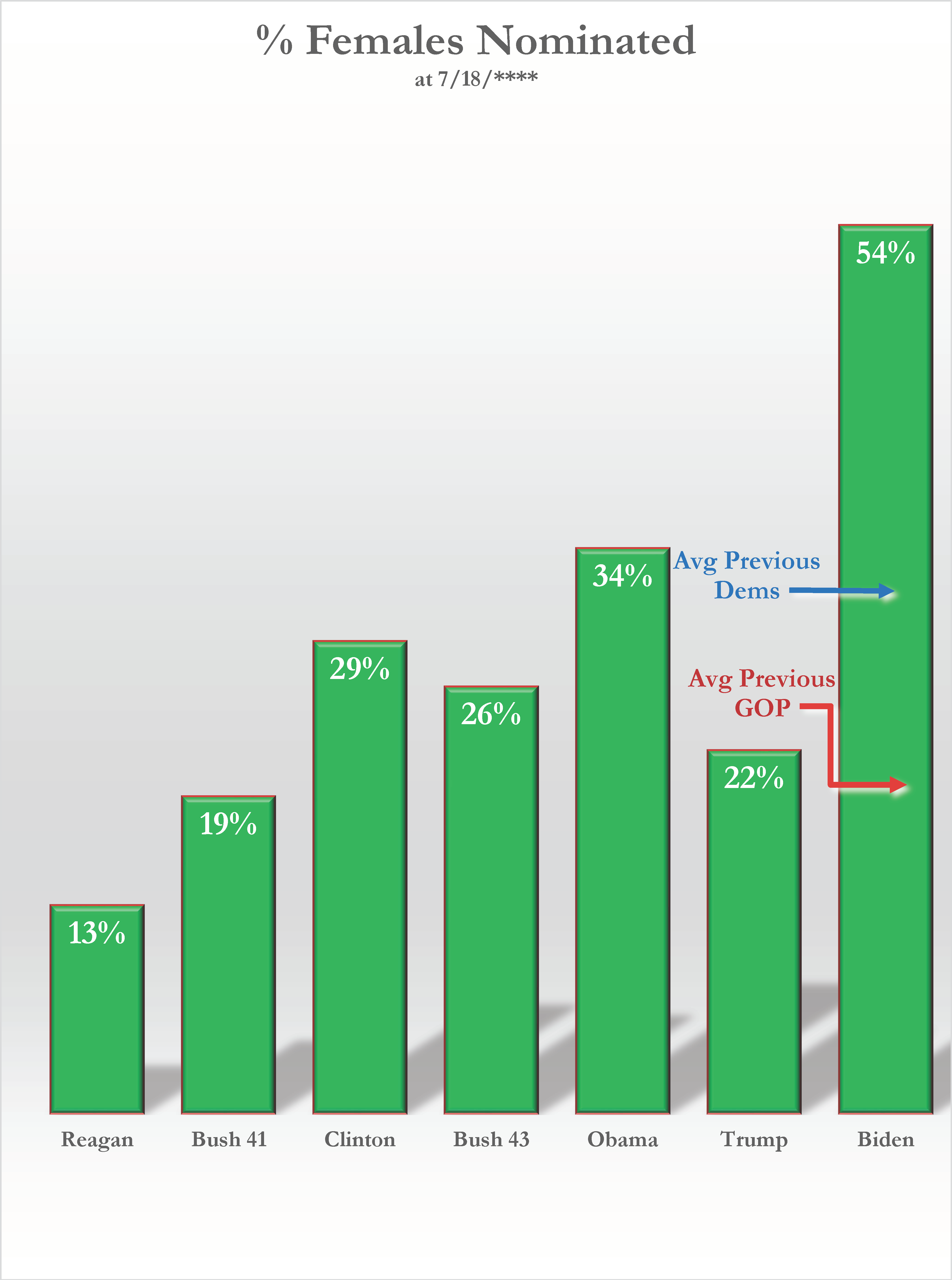 Candidate Biden promised an administration that reflected the make-up of the new American population. On gender, he has set records with his appointments. By comparison with his Democratic predecessors, he has exceeded their average by 50% while more than doubling the percentage of women for his Republican predecessors.

For questions or commentary, contact: Terry Sullivan, WHTP, at sullivan@ibiblio.org or 919-593-2124

The White House Transition Project documents the pace at which a new administration fills out the American executive branch through its appointments power. WHTP tracks the pace of appointments in four ways.

A Focus on PAS Positions. First, we track 980 presidential appointments requiring Senate confirmation (known as “PAS” positions). These appointments include top administration positions in all the cabinet agencies (e.g., the Deputy Secretary for Commerce), the top positions in the independent regulatory agencies (e.g., member of the Board of Governors of the Federal Reserve), and the top positions in the myriad of government boards and commissions (e.g., member of the Chemical Safety and Hazard Investigation Board). WHTP tracks the most important ambassadorships (e.g., Israel, UK, NATO, Russia, China) but we do not track all ambassadors, US Marshals, or most federal attorneys, though all these also require Senate confirmation. Also, note, technically the largest group of PAS positions are uniformed military officers. We don’t track them either.

The Pace of Institutional Deliberations. Second, WHTP follows the vetting processes both in the Executive and the Senate, detailing how long each takes to move a nomination along. In the Executive, we track from the White House announcement of an “intent to nominate” and then compare that when the executive forwards nominee’s packet to the Senate. This period typically involves the pace of ethics and security screening. In the Senate we track how long a nomination stays in the relevant Senate committees and then how long the nomination remains on the Senate’s calendar leading to the floor decision on confirmation. Note, in the modern era, if the Senate votes, it confirms virtually all nominations. Administration “failures” either get withdrawn or they simply languish in committee.

Measuring the Pipeline of Nominations and Confirmations. While nominations move along the process from identification to vetting to nomination to consideration to confirmation, a nominee moves through the hands of executive and senate staff and decision-makers both in the White House and the Senate. Presidential Personnel identifies potential nominees and later turns those over to the White House Counsel and the security and ethics agencies to look into a nominee’s background. Meanwhile the Personnel Office moves on to the next challenge. In the Senate committees and staff take similar, early responsibilities and turn their deliberations over to the full Senate. So, the appointments process is a group nominees and decisions and a pipeline process. WHTP assesses the pipeline as well in two ways: 1) how many nominees have secured the President’s “intent to nominate” (as a measure of the backlog of nominees) and how many eventual nominees await a final Senate decision (as a measure of Senate backlog). We take the average in each as an assessment of the vitality of the Executive and Senate processes.